The BMW 3 Series is still the best compact executive saloon 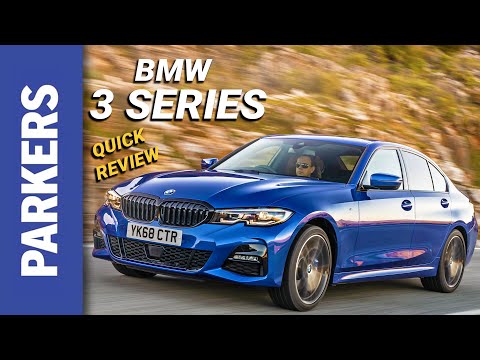 Is the BMW 3 Series any good?

Oh yes – it’s the standard-setter for all compact executive saloons today. Given the BMW 3 Series has been around in various guises since the mid-1970s, the company has had plenty of time to perfect the formula – and that they have. The current model has been on sale since 2019, and is bristling with the latest tech.

It’s available in saloon (reviewed here) and five-door Touring estate forms – and the closely-related 4 Series covers off the needs for those who are after a coupe, convertible and five-door fastback. In short, there’s a medium-sized BMW for everyone.

RIvals include the Audi A4 and Mercedes-Benz C-Class pairing, as well as other, less-popular premium alternatives such as the Alfa Romeo Giulia and Jaguar XE – both great to drive, if flawed in other respects. There’s also other choices in the form of the Lexus IS, Peugeot 508 and Volkswagen Arteon, so the 3 Series has more competition than ever.

There’s a huge amount of technology on the 3 Series. It starts with BMW’s 8.8-inch digital cockpit, which includes sat-nav. You also get Connected Package Plus, opening up Apple CarPlay preparation, Microsoft Office 365, real-time traffic information and remote services through a concierge. A set of parking sensors and a rear-view camera also come on every 3 Series.

As you move up the trim hierarchy you can order all manner of other kit. BMW now has its own Personal Assistant, which is a voice-activated system using the internet and artificial intelligence to learn to answer your queries. While we’ve seen this before from Mercedes and a number of other firms, this one’s unique in that you can name your own car. If you’ve called it Bob, then simply say ‘hey Bob’ and the voice activation will begin to function.

Other options include larger wheels, higher-spec headlights, a larger fuel tank, and a range of interior trims and finishes for the upholstery and dashboard trim, as well as more tech options such as upgrades to the media system, safety and driver assistance tech and stereo upgrades.

The first thing that strikes you is the lack of noise and vibration in the cabin. BMW claims it has done a lot of work in this respect, and the latest 3 feels like it’ll match Audi now for interior quality. That’s no mean feat. Standard equipment includes an acoustic windscreen and foam-filled cladding around the window shuts to keep unwanted road and wind roar at bay.

The suspension in regular M Sport setup feels little firmer than we’d have preferred, though this contributes to how well the 3 Series corners. If this is a concern, you’ve got the option of extra-cost adaptive dampers, which add a little more comfort to the whole experience, especially if it’s on larger wheels.

If you like performance saloons, the BMW M340i xDrive is well worth a look. It’s a halfway house to the fully fledged M3, mixing a 374hp 3.0-litre six-cylinder engine with grippy xDrive all-wheel drive traction. Performance, handling and equipment levels make it an interesting alternative to an Audi S4 or Mercedes-AMG C43 and it’s something of a Q car, with brawny performance credentials wrapped up in a modest executive wardrobe.

Read more on how the BMW 3 Series drives

The 3 Series range consists of familiar petrol and diesel engines, from the 320i and 320d to more powerful 330i and 330d versions. There’s also a 330e plug-in hybrid – a model with a 41-mile electric-only driving range, as well as 138mpg claimed fuel economy, ultra-low CO2 emissions and a 0-62mph time of 5.9 seconds. The best of all worlds? BMW certainly expects it to claim 25% of all 3 Series sales.

There’s also a high-performance M3 to rival the Mercedes-AMG C 63, as well as a middle-ground M340i xDrive to offer the best of both worlds.

The trims on offer are also familiar, made up of SE, Sport and M Sport across the main range, while the M340i xDrive and M3 will be models of their own. All models are well equipped with sat-nav, climate control, adaptive LED headlights, DAB radio and cruise control.

Our leasing partner, ZenAuto is offering BMW 3-Series’ from £1,074 per month.