One of the frustrations I had with the 3-Series saloon was its lack of versatility. Even though the boot size was half-decent (I could pack a family's worth of luggage in for a fortnights holiday), big or bulky items were a lot more challenging. Trips to DIY stores or carrying a bicycle were even more difficult and often impossible.

The Touring is so much easier on this front and demonstrates how small details can make a big difference. You can fold the rear seats flat to create a large load space and this transformation takes less than two minutes - neat push buttons both release the rear parcel shelf and drop the seat backs.

The result is a flat load space that swallows a bicycle whole, so there's no need to remove the wheels or seat post as with the saloon. What's more, there is still space for bags to fit in and even space for another bicycle to fit on top. Folding the seats back into position and clipping the parcel shelf back into place is just as easy as when removing them.

The only negative is if you want to carry tall, narrow loads such as my garden rubbish bag. Due to the sloping tailgate and the fact the rear seats slope into the boot space, the bag fouls the boot lid when I try to close it. The only solution is to fold down the rear seats and push the bag fully inside the car.

That said there is good floor space which makes trips to Ikea, the Mecca of flat-packs, an easy mission. Thanks to the spilt 40/60 rear seats it also means I can still have three people in the car and drive away from a DIY store with several flat-pack kitchen cabinets. 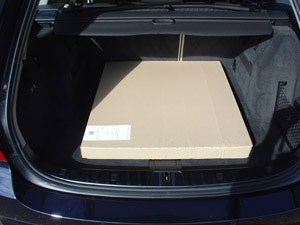