BMW has an enviable reputation for producing premium cars that have a strong emotive appeal for prospective car buyers and company car drivers alike. And plenty of up and coming brands are trying to repeat this. Skoda is just one of them and the brand has big ambitions to scale the automotive social ladder.

Nothing proves this more than the Superb - it's Skoda's top-of-the-range offering and actually bigger than the 3-Series Touring. But with a price range of just under £16,000 to around £27,000 it's much cheaper to buy new.

I tested a Superb 2.0 TDI (the higher power common rail diesel version with 170bhp) in mid-level SE trim. Given the Superb has more rear legroom and boot space, there are some surprising similarities - for instance weight and performance figures are near identical.

However, the 320d SE has much better fuel consumption and lower CO2 emissions - 58mpg on average compared to 49mpg for the Skoda. The BMW's diesel engine is more efficient too and has the added benefit of BMW's Efficient Dynamics system including the very simple stop/start technology

But the Superb has a unique feature - the clever twin-action boot. In normal mode, it opens like a saloon but if you hold and press another boot button, it opens like a hatchback. Again, it is very useful function but a little more complicated than the Touring's simple but effective spilt tailgate arrangement.

The Superb is a lot cheaper to buy and offers more room, but what surprises me is how frugal the 320d is in comparison, despite being slightly heavier. 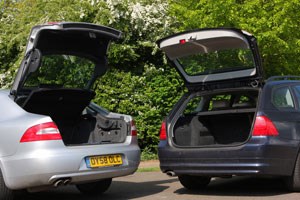