Claimed fuel consumption is nearly identical too with 59mpg for the 318d versus the 320d's 58mpg. And trying to spilt them on price doesn't really help matters with just over a grand separating the 318d SE Touring from the 320d SE Touring.

So how to choose? Well, given the experience of driving the 318d saloon, I found it to be a great performer on the road. The main difference was the need for more gear changes to stay in the power, especially going up steep hills. The 320d is much more flexible and has the ability to pull from lower down the rev range so there was less need to change down.

I also found it easier to hit higher average mpg figures and therefore greater tank ranges in 318d because revving it hard made little difference to going much faster. Accessing the power on the 320d is easier so hanging on to the same gear happens more often. 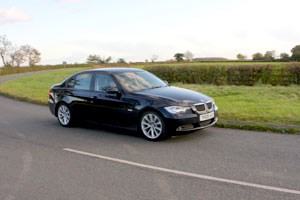