Saab has revealed its new crossover, the 9-4X which will be it's launched next year.

It is the third model in Saab's line-up and it is inspired by the Aero X concept car launched back in 2006 at the Paris Motor Show. It's a similar size to the BMW X6 - a big, old lump.

A four-wheel-drive system and a six-speed automatic gearbox are coupled with a 300bhp 2.8-litre engine, meaning 62mph is possible in 8.3 seconds.

You can select three modes of handling: ‘intelligent', ‘comfort' or ‘sport' can be chosen depending on how you want to drive the car. There is also an ‘eco' button that changes the gearshift pattern and accelerator pedal characteristics to get better fuel economy.

The cabin is spacious, and gets a carbon effect dash. Typical Saab aviation references are all over the interior, with the altimeter-style speedo readout and ‘joystick' adjusters for air vents. There's also a ten-speaker sound system with 5.1 surround sound and MP3 connectivity.

The rear seats can be folded down as one to create a flat floor (without moving cushions or headrests). There's also a hidden storage space under the boot floor, accessible with aircraft-style handles.

Safety is an important aspect of the 9-4X. As well as having the maximum five stars in Euro NCAP's crash tests, the whole range gets electronic skid protection and clever lights that react to how you're driving to offer the best visibility at all times.

The 9-4X is due to go on sale in the UK in late 2011. Saab has yet to release economy or emissions data, or pricing. 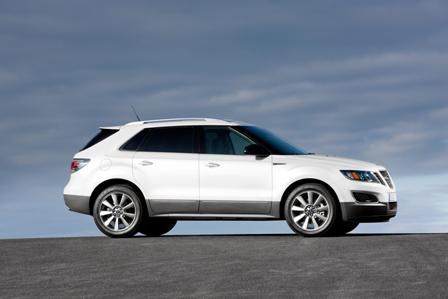