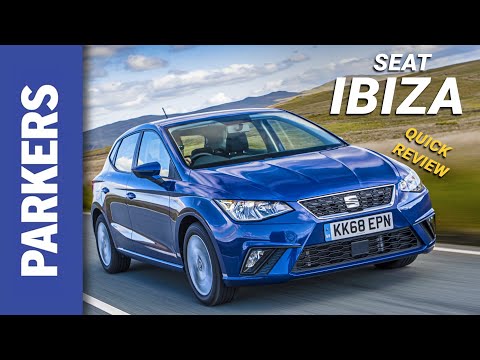 When it comes to buying a supermini, buyers want it all – practicality, ease of operation, reliability, desirability – you name it, it’s on the wishlist. The SEAT Ibiza is one of those rare cars that absolutely nails it in just about every regard.

The Ibiza is SEAT’s best-selling model, coming only as a practical, five-door hatchback that manages to blend really impressive interior room with sharp, sporty styling that’s bound to appeal. It’s available with a wide range of great engines, has a beautifully-finished interior, and is great value with competitive finance deals almost always on offer.

Of course, being a supermini, the Ibiza has a lot of really talented opposition. It’s based on the same underpinnings as the Volkswagen Polo and Audi A1, both of which offer a more premium and desirable air. The UK’s perennial best-seller, the Ford Fiesta, gives strong competition especially for keen drivers, while there’s no forgetting the latest Renault Clio – Parkers First Car of the Year award-winner for 2020 and, in our view, the best small car on sale today.

In short, buyers are really spoiled for choice when it comes to buying a small car.

SEAT customers are overwhelmingly younger than other supermini buyers (by about 10 years according to the brand), and it’s easy to see why with sharp design, neat proportions and eye-catching design details. The Ibiza looks like a shrunken Leon, and that’s certainly no bad thing, with sharp creases around its body work and distinctive LED lights featuring on some models. We think it’s one of the finest-looking superminis out there.

That doesn’t mean practicality has been ignored – quite the opposite. This fifth-generation Ibiza is only available in a five-door body style. Demand has fallen for three-door superminis, so the Ibiza SC no longer forms part of the range like it used to. It’s the same story for small estate cars; the ST estate has gone in favour of the Arona. In fact, this Ibiza is 2mm shorter than the car it replaced, but SEAT boasts it has more interior space and boot room than ever thanks to a 60mm increase in the wheelbase. This translates to enough space for four adults to fit comfortably, as well as their luggage in a boot that’s 63 litres larger than it was previously - now offering 350 litres of room.

The interior design is more restrained than the outside, but it’s functional and very easy to get used to even after a short period of time spent behind the wheel. Interior quality trails some of its rivals, but it feels like it’ll last, plus it comes with a host of equipment that will appeal to those who love gadgets, with plenty of connectivity options to keep you entertained.

Plenty of trim levels to choose from

A familiar set of trim levels make up the Ibiza range - SEAT calls it Easy Move - that means you can't pick a model and then add options. If you want more kit, just get the next trim up. The line-up starts off with SE, moving up to SE Technology, FR, FR Sport, Xcellence and even more luxurious Xcellence Lux at the top of the range. The good news it also doesn't cost any extra to go for a particular paint colour. They're all included.

SEAT launched the Ibiza with some attractive finance deals to entice customers, including a free insurance offer on some models. It still offers attractive PCP finance costs compared with its rivals, which only boosts its appeal.

Buyers are well catered for in terms of engines, with familiar 1.0-litre three-cylinder units available in a choice of 80, 95 and 115hp forms. The latter two are turbocharged with TSI badging (the former is called MPI). Strong economy is par for the course with all models returning over 45mpg, with low CO2 emissions across the board as well. A 95hp 1.6-litre TDI diesel was launched in 2018, and offers excellent fuel economy as well as decent performance given the modest power output, but only sells in small numbers.

For most though, petrol power will be in favour, especially around town. They’re nippy and frugal, yet also refined, with slick manual gearboxes standard on all models, with a DSG automatic available on the 115hp 1.0 TSI. On the move, the Ibiza manages to blend driving fun and comfort very well indeed. It’s as at home on a tight, twisty road as it is in the outside lane of the motorway.

In May 2018, a recall was issued on SEAT Ibiza, SEAT Arona and Volkswagen Polo models regarding the left rear seat belt unintentionally releasing. Such an event may occur during quick lane changes and when the centre rear and left rear seat are occupied at the same time. A redesigned belt lock fixture will be fitted during the recalls.

Read on for the full SEAT Ibiza review