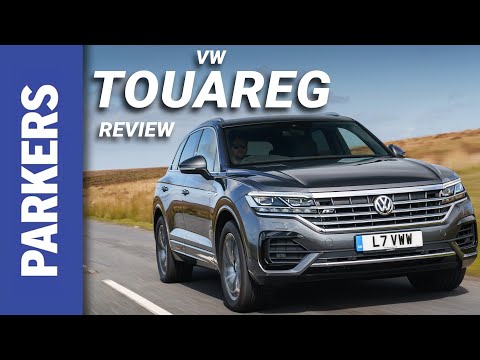 Volkswagen is keen to remind buyers that the Touareg SUV is now, and will always be, its flagship car. It's always been an imposing technical marvel, but since the departure of the Phaeton, it sits alone at the top of the VW price list – and it's up against some very impressive rivals.

Considering this opposition includes the Audi Q7, BMW X5, Land Rover Discovery and Mercedes-Benz GLE, it's understandable that Volkswagen has thrown its developmental kitchen sink at this car. This explains why it has packed the Touareg with a range of cutting edge technology to make it the best driving, most advanced vehicle it offers.

On paper, it looks like the Touareg is more than capable of answering the questions posed by its rivals, as well as being an interesting alternative to more traditional luxury saloons.

The Touareg is wider and longer than its predecessor, and boot space grows from 697 litres to 810, and there's more room for passengers, too. Although it's a gargantuan Volkswagen, it's smaller than rivals such as the Audi Q7 and Volvo XC90.

The third-generation Volkswagen Touareg has an extensive package of technology inside and out. Its styling more than hints at the smaller Volkswagen T-Roc, Tiguan and T-Cross while the interior takes a huge step forward over what came before, bringing it in line with its premium-badged rivals. In the metal, it disguises its bulk very effectively, and has the air of a less-imposing baby Bentley Bentayga about it.

The interior's centrepiece is what Volkswagen calls its Innovision Cockpit. This is dominated by a 12.0-inch digital instrument display also available in other VW models. This is combined with another even larger display (up to 15.0 inches) in the centre of the dashboard.

It's a hugely safe car, as confirmed by its five-star Euro NCAP crash-test rating. There is no seven-seat option (there never has been on the Touareg), unlike its principal rivals, the Audi Q7 or Land Rover Discovery, and this goes some way towards explaining why it's smaller on the outside than those cars. The interior is a masterclass of quality materials and precision-fit assembly.

The Touareg is available with a pair of diesel engines – the same 3.0-litre diesel motor, in 231hp and 286hp forms. A 340hp, V6 petrol is also offered. The only gearbox option is an eight-speed automatic Tiptronic, while all cars get 4Motion four-wheel drive as standard. It also boasts a 3.5-tonne braked towing capacity, which is the most any car is allowed to have under UK law.

A 463hp plug-in hybrid powertrain will join the line-up later in the form of the Volkswagen Touareg R. No UK release date has been confirmed yet.

It's also available in a myriad of model variations – starting with the entry-level SE, through the SEL, SEL Tech, R Line, R Line Tech and culminating with the stylish Black Edition model. It's a wide range with a highly competitive starting price – but does that tech and choice make it the best large SUV you can buy?

Click through the next few pages to read everything you need to know about the Volkswagen Touareg including its practicality, how much it costs to run, what it's like to drive – and whether we recommend buying one.