On this page you'll find full dimensions, load area and payload details for the sixth-generation Volkswagen Transporter, known as the Transporter T6.

This model was facelifted in 2019, and is now referred to as the Transporter 6.1; these began arriving with UK customers in early 2020.

For details of the Transporter's driving experience, value and other features see our main review page.

The VW Transporter is one of the most versatile vans in the medium van market sector – and though this sixth-generation T6 variant is based on the same chassis architecture as the T5 Transporter it replaced, this means it has highly developed and practical loading characteristics.

These have been further improved in small ways as part of the 2019 Transporter 6.1 facelift (in the UK from early 2020), including the addition of a new load-through area under the passenger seat that makes it possible to carry longer pipes and similar objects.

How practical is the VW Transporter?

The Transporter is deceptively narrow. But since the width between the wheelarches is just greater than 1.2 metres it is still able to fit a Euro pallet in lengthways, and the long wheelbase (LWB) version can carry up to three Euro pallets. 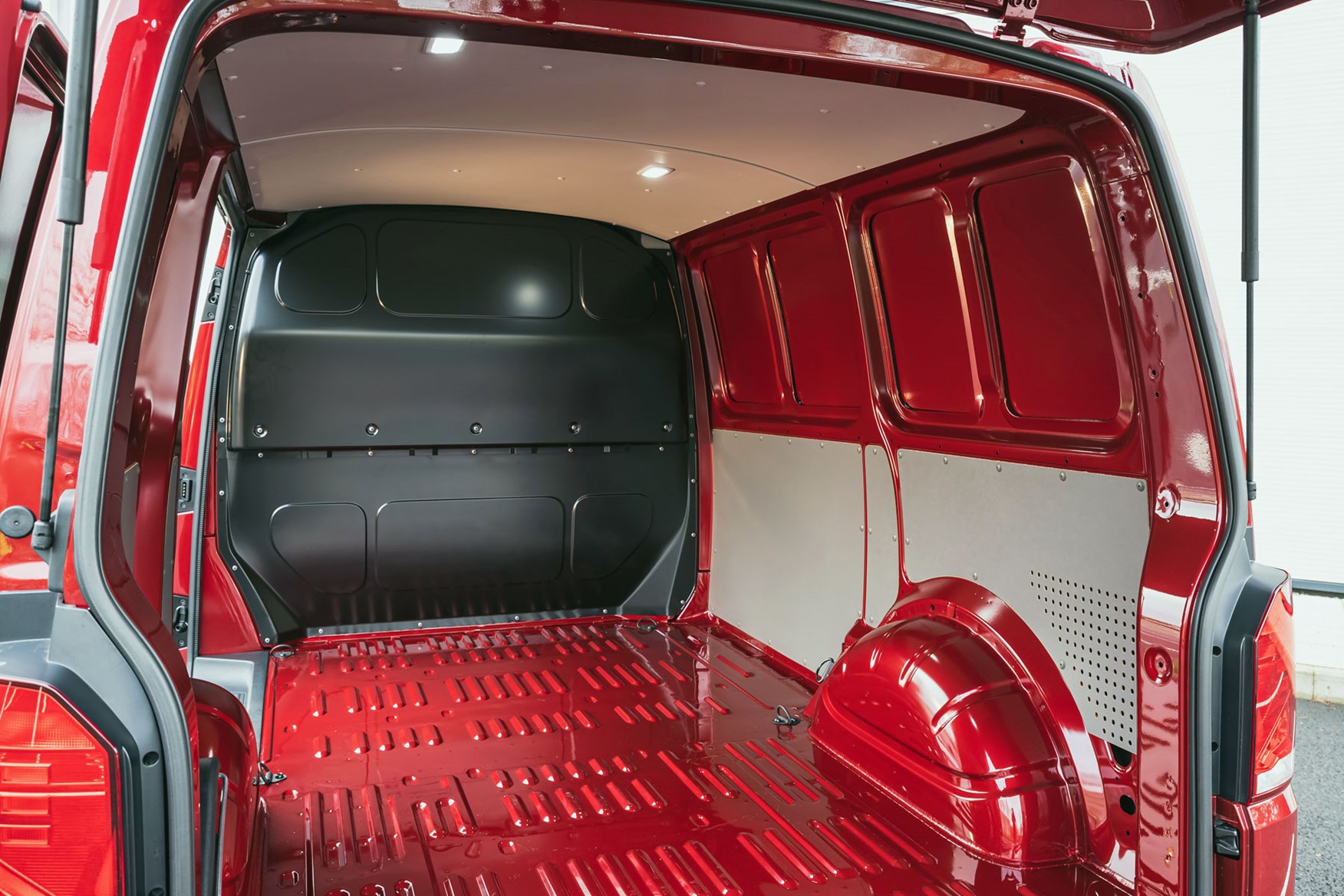 The short wheelbase (SWB) model has a load length of 2,570mm, meaning it is able to carry 8x4 sheets.

And while most vans in the mid-size segment offer two bodylengths and two roof heights, at launch in 2015 the VW Transporter was available with an extra, third roof height.

This makes Transporters of this period particularly versatile. However, since the middle Medium roof height was discontinued in early 2018 due to lack of interest from UK buyers, not only can you no longer buy a new one, you'll probably struggle to find a used example, as clearly not many were ever sold here. 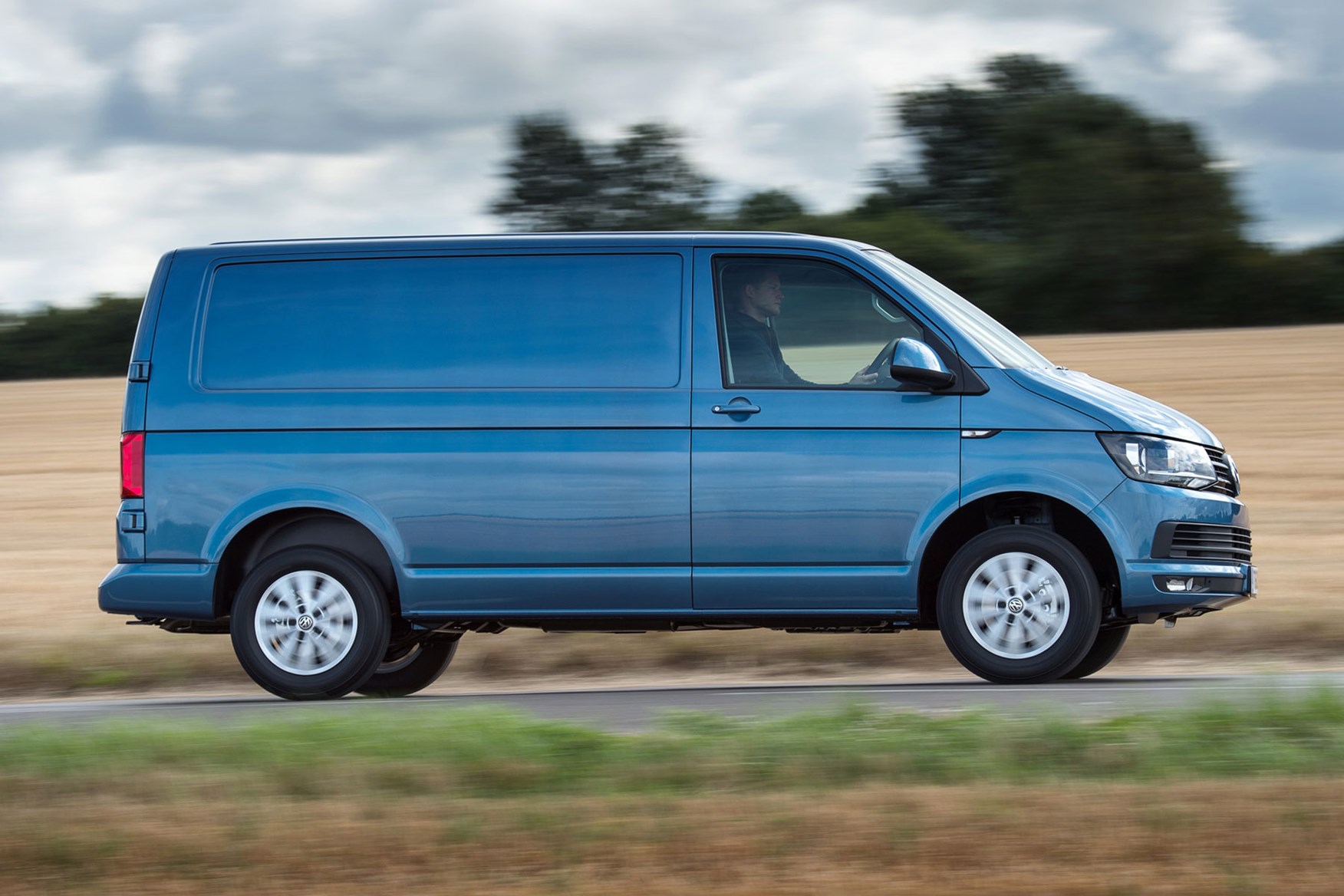 A consequence of this is that the short wheelbase (SWB - above) Transporter is only available with the Low roof now, as the High roof option is only offered on the long wheelbase (LWB - below) model; previously a SWB Medium roof version was available. 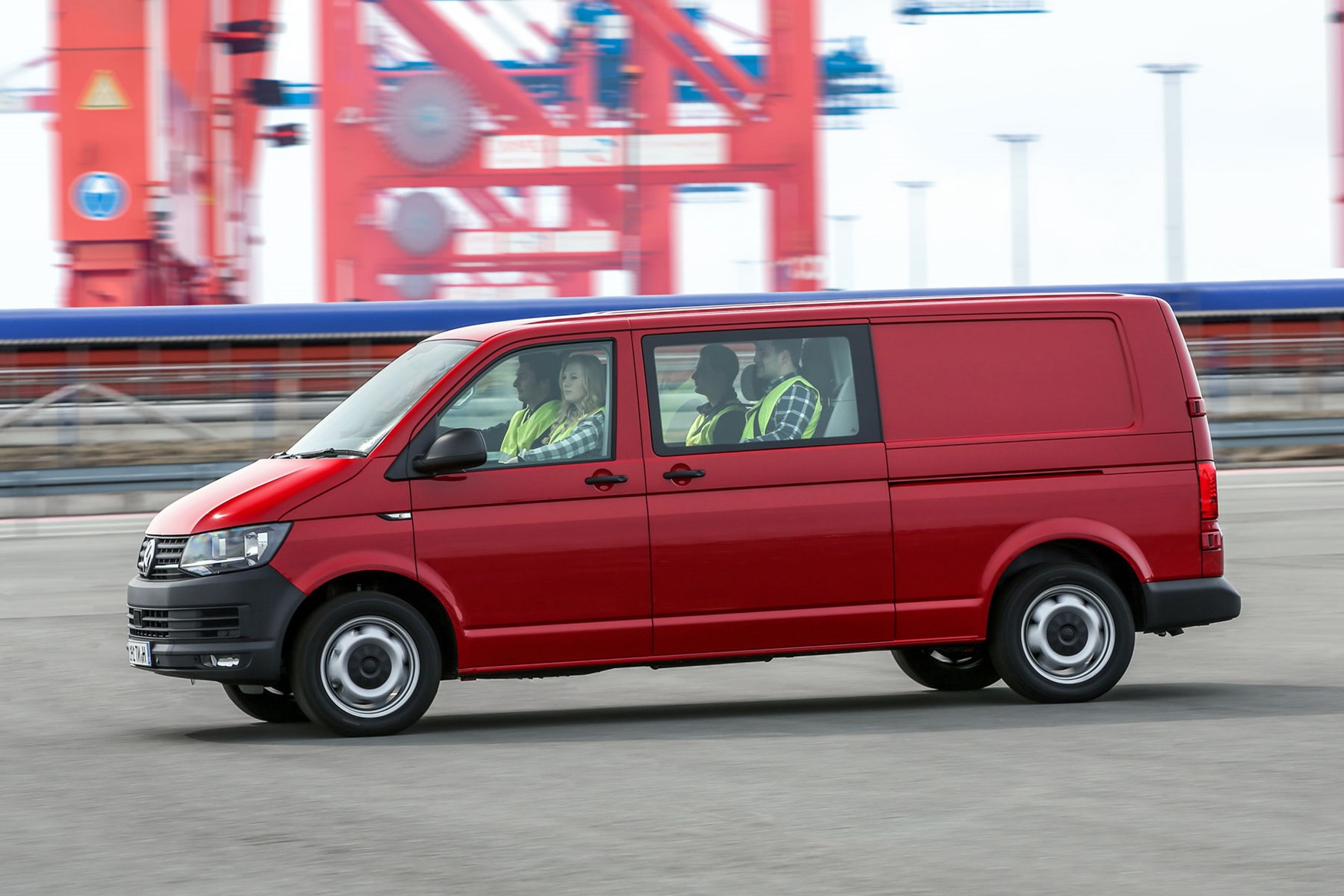 Full details of the external and internal dimensions for both Transporter bodylengths and all three roof heights are listed below.

The Transporter's standard rear doors - often known as barn doors or wing doors - open to 180 degrees, although there is the option to extend this to 250 degrees. They have a very wide opening of 1,486mm (around 80mm wider than most competitors at launch), although the standard side loading door is fairly small (1,020mm by 1,284mm).

A top-hinged tailgate is available instead of the barn doors if you prefer. This tends to be particularly popular with lifestyle buyers, being large enough to function as a rain shelter if needed. You'll need plenty of space behind the van to open it, however, which can make it difficult to use in car parks.

Up until June 2018, entry-level Startline panel van models were not fitted with a bulkhead, which is good news if you're trying to minimise vehicle weight but potentially bad news for driver and passengers should the van be involved in an accident.

However, since June 2018 a full-height steel bulkhead has been standard on the Startline, as it was on Trendline specification and above since launch.

All models get half-height hardboard lining (optional full-height lining shown in the image below). 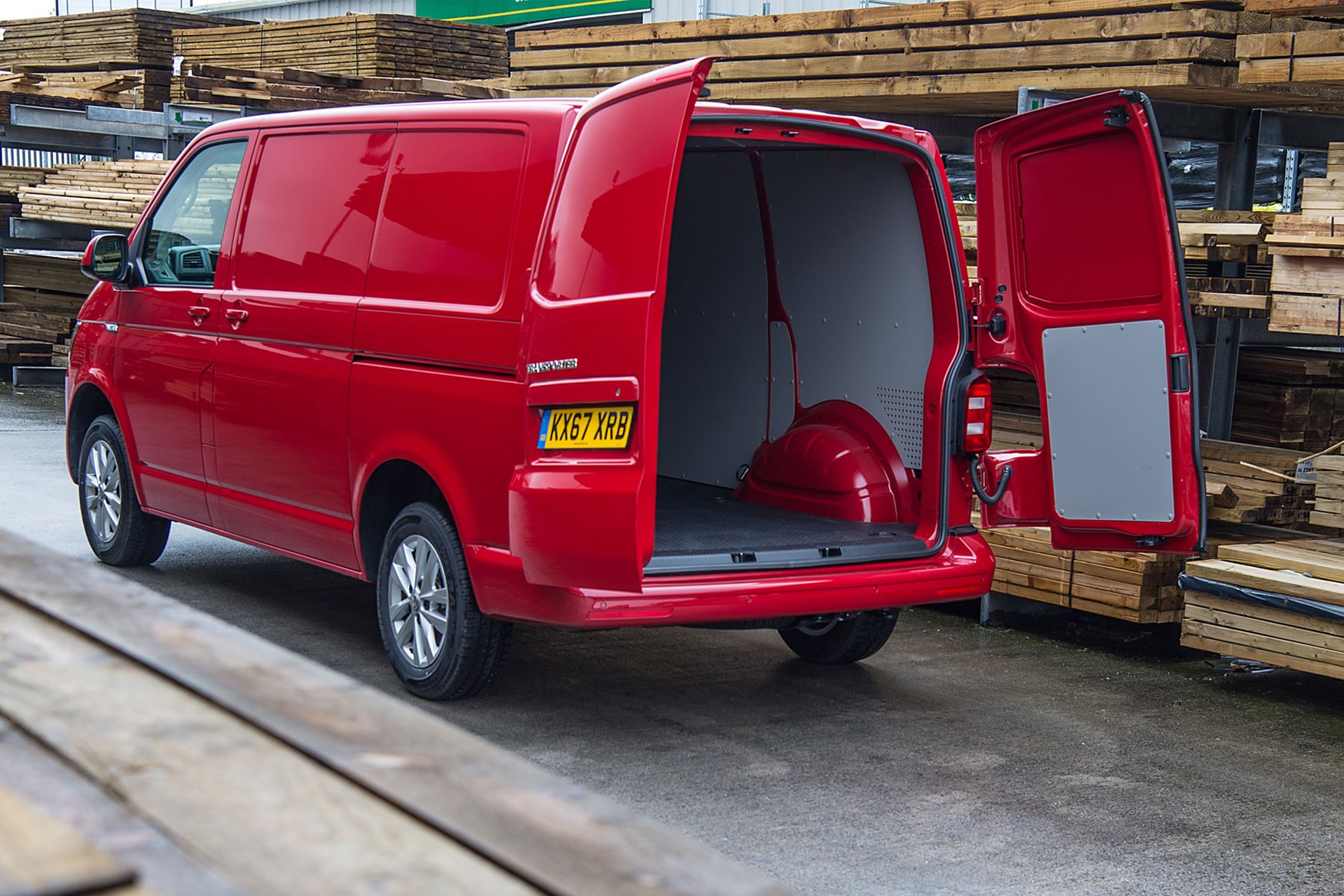 The load area floor is uncovered steel as standard on the panel van, with rubber protection available on the options list.

You get two interior lights (three for the High roof), and six load-lashing points on SWB models, eight on LWB Transporters.

How does the Transporter kombi differ to the panel van?

Transporter T6 kombi variants feature a removable rear seat, in combination with an open load area and no bulkhead. 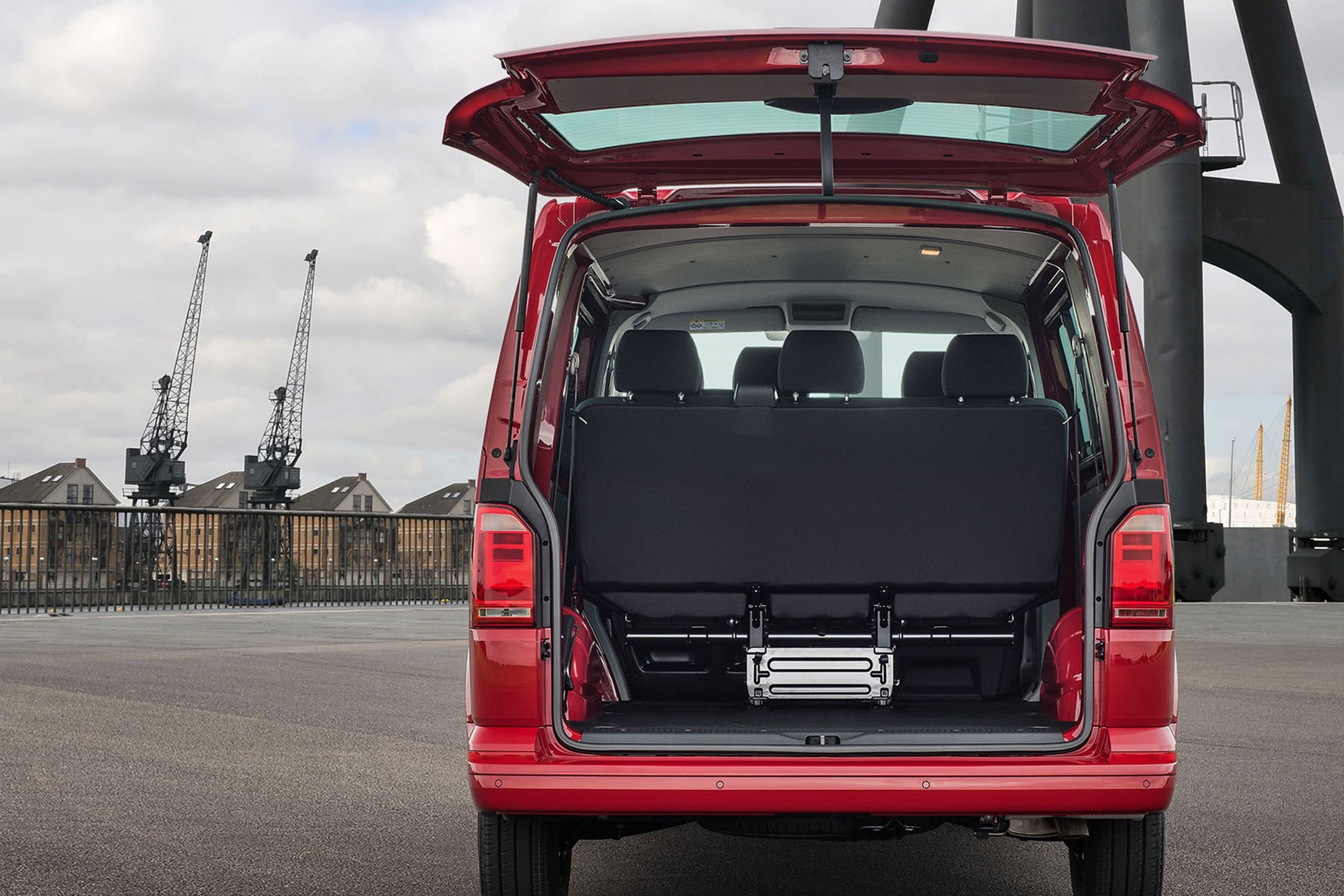 This gives you added flexibility, but again at the cost of some safety. A half-height bulkhead is available to be fitted behind the front seats as an option but there is no full-height alternative at all on these earlier kombi models.

They do benefit from full height load area panelling, however, and a rubber load floor. As part of the changes for the facelift in 2019, VW has added a bulkhead option to this version of the Transporter, making it a better rival for the Ford Transit Custom DCiV (Double Cab-in-Van).

As explained above, from early 2018, the Transporter has only been available to buy new in the UK with a choice of Low and High roof options, as pictured. 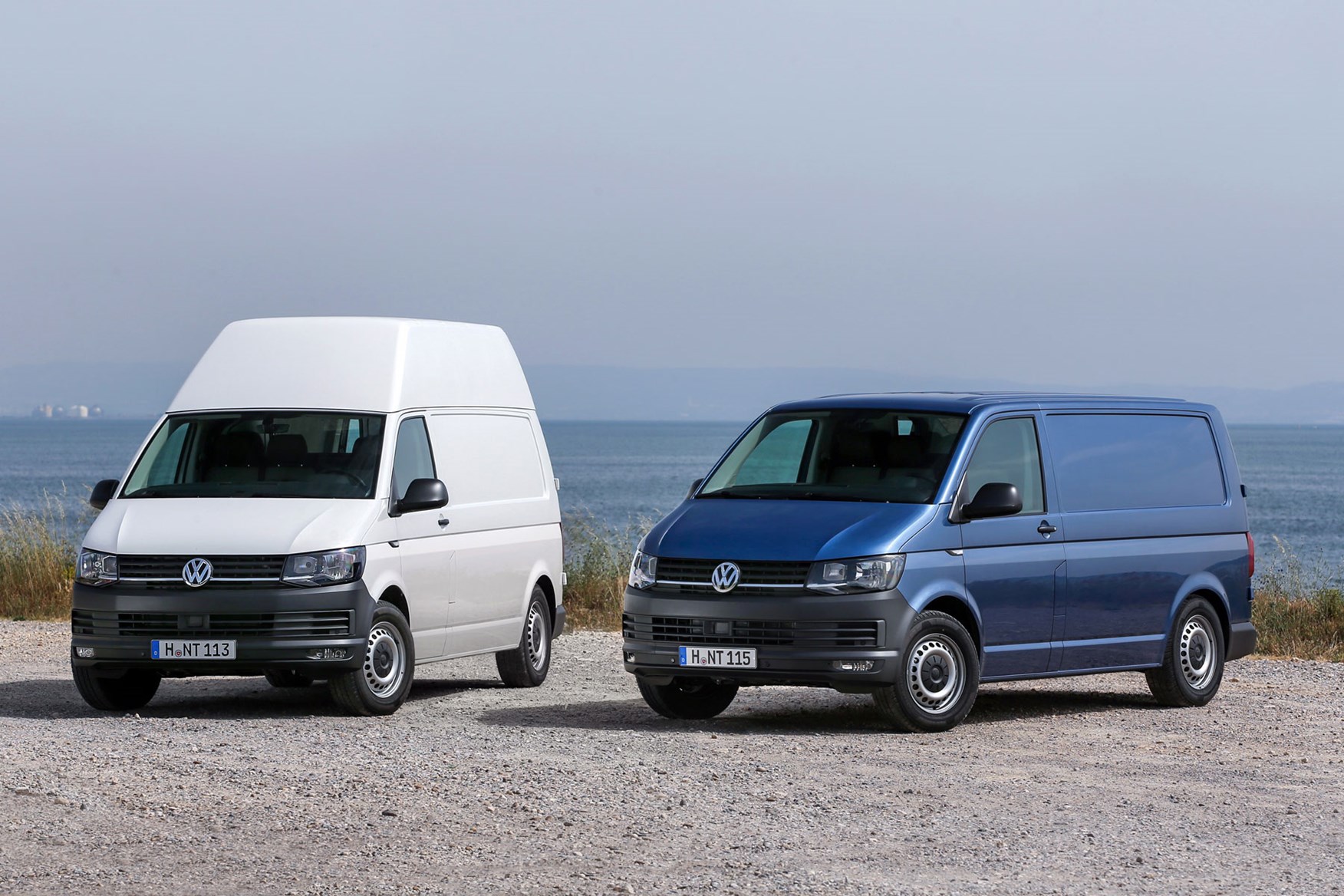 However, since a Medium roof option was initially available at launch, we have listed the dimensions for these versions in the table below as well.

Note: if reading on a smartphone, you many need to rotate the screen sideways to view the entire table below.

The facelifted Transporter has some slightly different dimensions due to changes to the engines - the ones to watch out for are the (very) minor increase in length and a slight increase in height for High roof models.

Note: if reading on a smartphone, you many need to rotate the screen sideways to view the entire table below.

For some context, the High roof LWB Transporter has a whole cubic metre of additional space inside over the equivalent Transit Custom.

The SWB Low roof VW has marginally less room inside than the 6.0cu m Ford alternative.

The Transporter 6.1 facelift has the same internal dimensions as the T6. However, this model is now available with a load-through feature, allowing long, thin items to pass through the bulkhead and into a space under the passenger seat.

Full payload details for the T6.1 facelift will be added closer to the vehicle's UK launch in November 2019 as we are still waiting for them to be confirmed. Until then, please find details of payload for the existing T6 model below.

As of 2018, the pre-facelift Transporter T6 was available in five nominal gross vehicle weights (GVW), as follows:

For the T6.1 facelift, the T27 has been dropped, leaving the remaining four options as listed above.

GVW is the total legally allowed weight of the vehicle, including the people and everything else on board. As such, it's important to know exactly which variant you're driving, as this also defines the payload.

Most Transporters carry a badge on the back with the relevant T-number, but doublecheck with the weight plate to make sure.

Payload for this generation of Transporter ranges from just under 800kg to well over 1,300kg. That maximum falls around 100kg shy of the Ford Transit Custom, which itself is a little behind the Citroen Dispatch / Peugeot Expert / Toyota Proace / Vauxhall Vivaro family, which have the highest payload ratings of any medium vans. 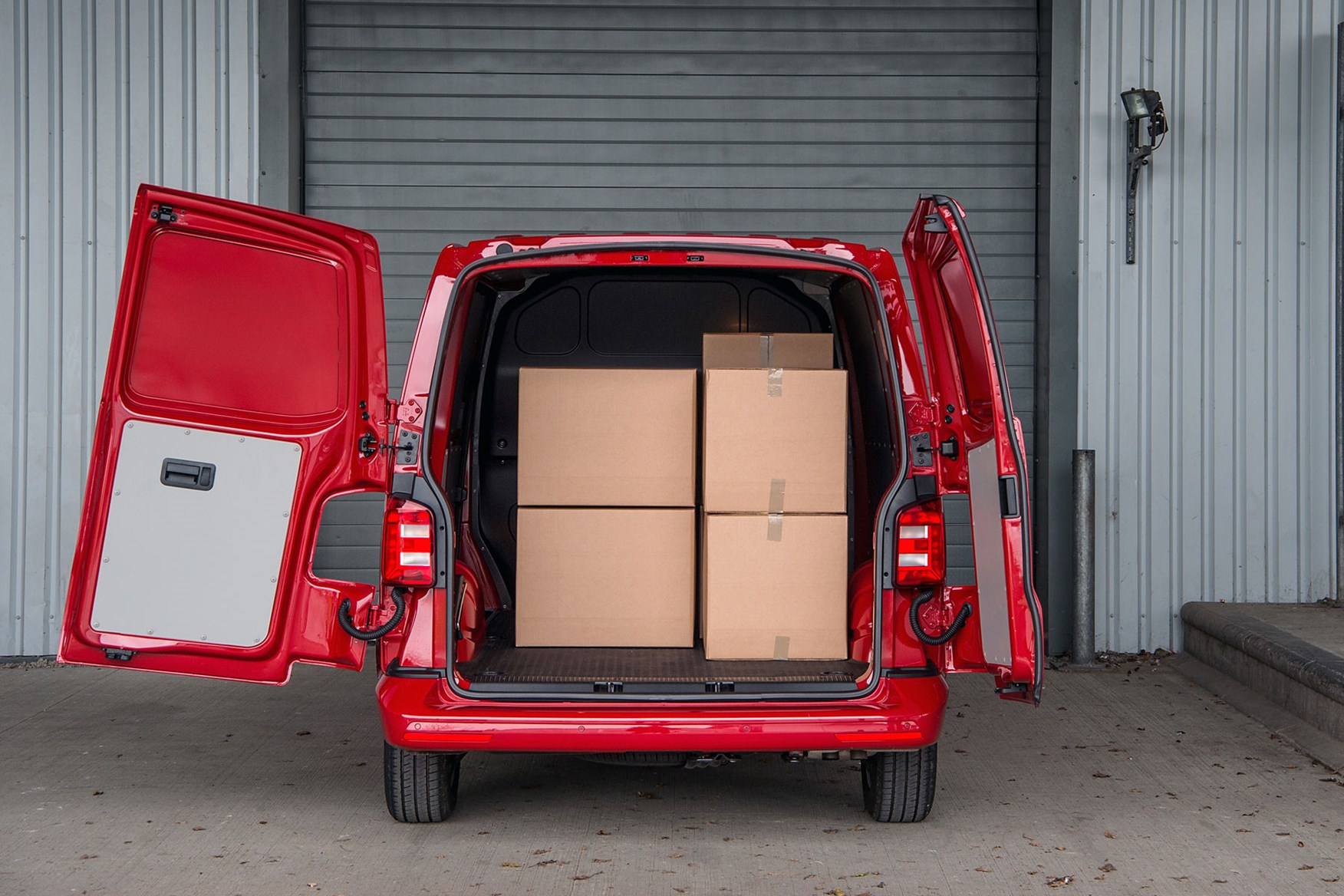 When making comparisons to other mid-size vans, note that VW's official brochures and spec sheets usually give the maximum payload minus a nominal 75kg representing the weight of the driver.

Only one other van manufacturer does this (Mercedes), so we've given the Transporter's payload options with and without this 75kg reduction below (most rivals should be compared to the higher payload figure without the reduction).

As with all vans, exact payload amounts will vary with trim level, engine type and fitted equipment.

Kombi models - which are available in T30 and T32 variants only - have approximately 100kg less payload capacity than the equivalent panel van.

Unbraked towing capacity on all T6 and T6.1 Transporters is 750kg.

Kombi models range from 2,200kg to 2,500kg braked, regardless of bodylength.

VW Transporter (2015-on) side door opening